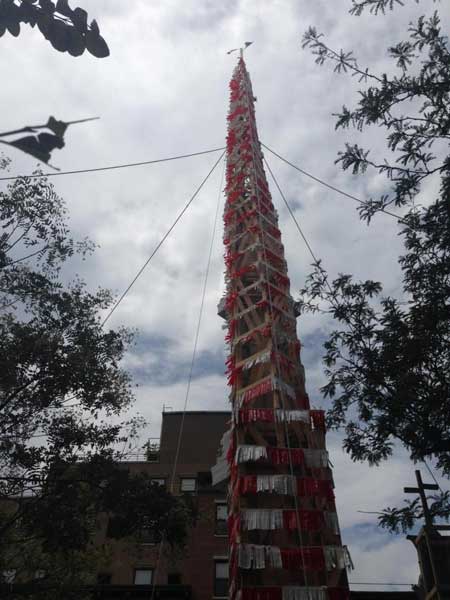 These broad-shouldered parishioners are back, and ready for another heavy lift to commemorate their heritage in Italy and, later, in East Harlem. At the annual festival this weekend, they’ll continue their tradition of hoisting a 31/2-ton tower of wood, papier mâché and styrofoam, and marching the 80-foot-high figure, along with a full band of musicians, up and down Pleasant Ave.

The Dance of the Giglio Festival commemorates the Miracle of Saint Anthony, said to have occurred some 120 years back when a sick child was cured in Brusciano, Italy, their ancestral home.

“In Sicily, they do it but they drag it on wheels,” said Frank Uvenio, 81, who serves as a captain for the weighty ritual. “In Brooklyn they do it, but it’s made out of aluminum — and the people in Italy don’t like that, because the tradition is wood,” he said. “We do it with wood.”

Over the course of Sunday afternoon, more than 100 people will shoulder the burden for about two hours altogether.

“You can see the suffering on their faces,” said Dominick Russello, another captain who’s been happily lifting for decades. “You’re offering your pain to the saint.”